HOBY Leadership Seminar in Seoul 2020 which was sponsored by Seoul was held in the COEX conference room for 2 days from June 6, 2020. HOBY was founded by Hugo O'Brian in 1958. Since then, HOBY has brought up about 50,000 global leaders. In the US, a lot of students who study in the Ivy league have attended the HOBY leadership camp. Like this, it is one of the most influential organizations in the world and has a long history. It is the leading institution which promotes global leaders in more than 30 countries. To realize its vision, it is running various leadership programs every year.

Among other prominent lecturers, Emanuel Pastreich, the president of Asia Institute, who studied at Yale, Tokyo, and Harvard university gave the lecture about the impressive topic, 'What is the future of Korea and the world?' at the seminar. 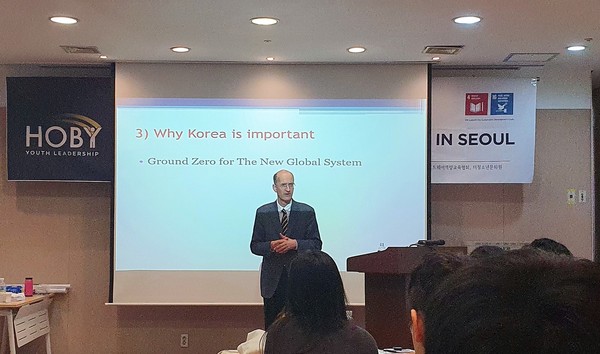 (Dr. Emanuel Pastreich is lecturing about the future of Korea and the world at HOBY Leadership Seminar in Seoul 2020)

Dr. Emanuel Pastreich explained common features that Korea and the world are facing hereafter. They are less conversation, radical digitalization, the rapid development of technologies, climate changes, aging society, and viruses. People in the world are already aware of these problems. He took the COVID-19 as an example of those problems.

His main point was that people's worry is focused only on the pandemic itself, not its fundamental causes such as the environment. The polluted environment should be the direct cause of the pandemic.

Additionally, he added Korea's strengths. They are flexible institutions, technology combined with humanity, cultural creativity, enthusiasm for educations, high level of education in goal, and Hongikingan.

According to him, these common features are essential topics for teenagers to know in order to become global leaders.

Below is what I have interviewed Dr. Emanuel Pastreich about how teenagers in Korea should prepare themselves to become global leaders.

Independent candidate for president of the United States (independent)

Doyoon Lee : If two Koreas are unified in the future, what country would what might be its global role?

Emanuel Pastreich: A unified Korea would be a transformed Korea and that transformation could come quickly in this age of tremendous change and geopolitical uncertainty. First, the split of Korea into two countries through artificial means has done great damage to Koreans in terms of their self-confidence and their ability to put forth a vision for the world. Although the educational level and skill level in South and North Korea is high, Koreans have not had the confidence to either assert effectively the Korean perspective or to make constructive suggestions for what the world could be. The geopolitical and ideological split is the major reason. That could change.

Also, unification would be an opportunity to form a new country, a new constitution, new institutions. It could be a chance to make up new approaches to governance and to the culture that is appropriate to current challenges. That opportunity comes once in 500 years. It could make Korea a true leader.

Finally, infrastructure in North Korea can be entirely environmentally friendly, the new banks can be regulated and fair, the new approaches to transportation can be set up 100% renewable. That would make Korea a world leader.

Doyoon Lee : After this pandemic, what would be the most dramatic changes in Asia?

Emanuel Pastreich : The old order is not coming back. We are going to have to reinvent the economy around citizens, not around banks and corporations. We are going to have to build our own communities. The challenges will be enormous, but I believe that the youth of Korea can rise to the occasion. Also, I think that the current crisis will lead to a deep questioning of technology and its role in society, and of the consumption-based economy, we have embraced. Vision, deep understanding, and bravery will be key.

Doyoon Lee : As you explained in your lecture yesterday, the world is experiencing radical changes in various areas. Can you give me some valuable advice that helps me become a global leader? Emanuel Pastriech : First and foremost, think for yourselves. Your parents and your teachers are telling you that things will be the same for you as they were for them. They are completely wrong. Make up your own strategy. Read about technology and its impact on society, about climate change, the concentration of wealth, the new security challenges, and the nature of money. Think deeply about what the future might be-but do not assume that you know. Then try to predict what you think that you need to do to prepare for that world, not for the world of your parents.

I also recommend that you start to take real action to inform yourself about the scale of the climate change crisis and what needs to be done. I think there are some central films and books that help. Then cultivate in yourself the bravery to go up to people and tell them the truth and demand that they change what they do. Stop using plastics, stop wasting food. Think about our future. If you can do that, you will have what it takes to be a leader.

I hope this article inspires my friend teenagers who want to be global leaders.

https://url.kr/9PmwdN : Independent candidate for president of the United States (independent)